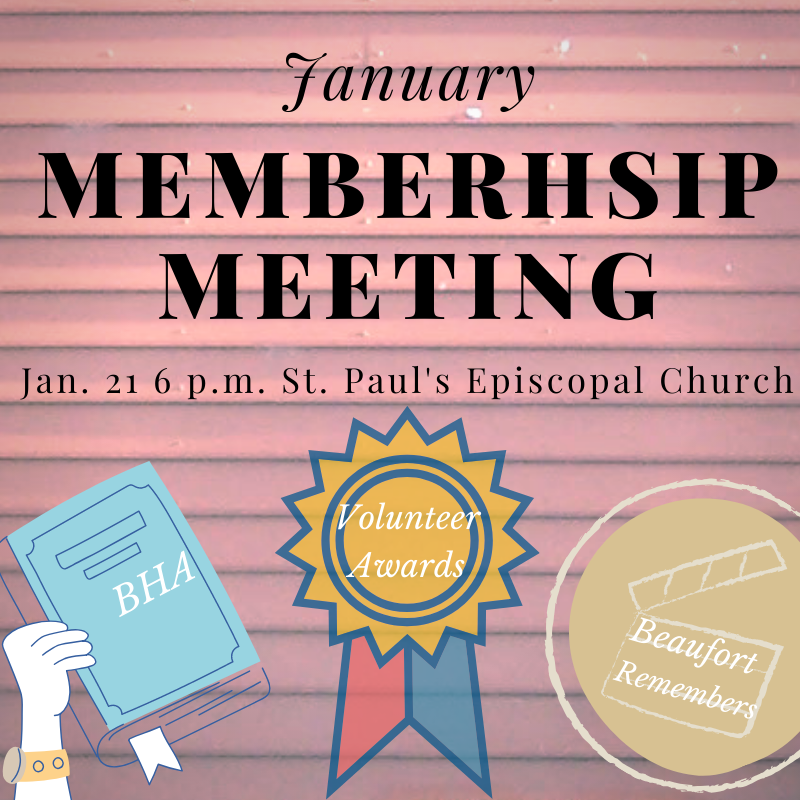 Members and prospective ones are invited to join the Beaufort Historical Association for the Annual Membership Meeting and potluck dinner on January 21, 6 p.m., at St. Paul’s Episcopal Church at 215 Ann Street in Beaufort. The meeting is a perfect opportunity to make friends with fellow members and new ones while enjoying a delicious meal.

During the meeting, there will be a special presentation of the film Beaufort Remembers, a Scrapbook Productions, Inc. and Beaufort Documentary Group film about the daily life of Beaufort from the 1920s to the 1960s, told in the voices of those who lived it.

“The premiere of the documentary in December was a huge success bringing the whole community together in celebration of Beaufort’s past,” BHA Executive Director Patricia Suggs said. The event was completely sold out, so this gives our members a chance to see a portion of the film.”

The 2019 Volunteer Awards will also be presented. The BHA will present the prestigious Edward and Frances Piver Volunteer of the Year Award to the outstanding volunteer of the year. This award was established in 1968 by the Piver children to honor their parents.

The selected recipients of the Piver award are a group that has excelled above their commitment to the BHA and have been leading figures in its success. The Association is fortunate to have volunteers who give their time and talents in a variety of ways from guided tours, driving the double-decker bus, serving on committees, answering phones, helping with events, and more.

The Newcomer, Longevity, Couples, and Fundraiser awards will also be presented. The Newcomer is for the “rookie” who has made a meaningful contribution in a relatively short time as a member.  The Longevity is presented to a long-time volunteer who has devoted time over many years and provided unselfish assistance to the BHA in a variety of ways. The Fundraiser is for the person who does an outstanding job of raising funds for the BHA’s many needs. This fundraising may be a part of an event, for an individual project, or for a continued generation of funds over the years. Lastly, the Couples award goes to an energetic pair who doubles their fun by donating their expertise and enthusiasm resulting in twice as much service to the BHA.

Nominations are now being accepted and submissions can be made by cutting out and mailing in your ballot to the Beaufort Historical Association at 150 Turner Street, Beaufort, NC 28516.  The ballot can be downloaded online at www.beauforthistoricsite.org. You may also call 252-728-5225 or email officemanager@beauforthistoricsite.org to submit a nomination.

For additional information on the Membership Meeting, stop by the Visitors Center at 130 Turner Street, call 252-728-5225, or visit beauforthistoricsite.org.