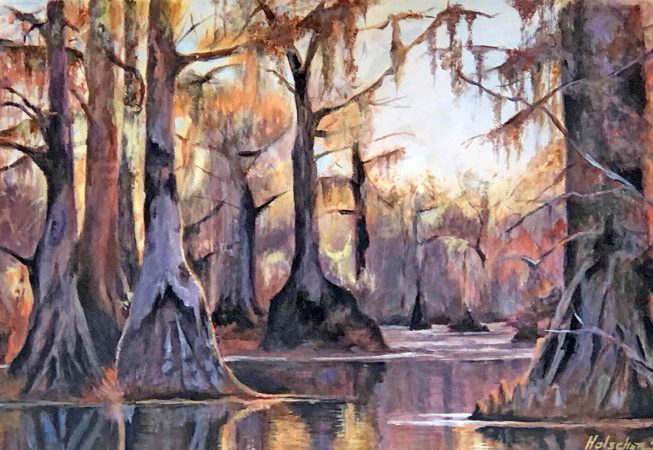 The Mattie King Davis Art Gallery is excited to welcome Pat Holscher as their Featured Artist for April and May. Holscher creates compelling stills of animals, objects, and places by use of watercolor and acrylics. A show will be held on Friday, April 2 from 4:30 – 6 p.m. at the gallery, located on the grounds of the Beaufort Historic Site at 130 Turner Street, Beaufort, North Carolina, 28516.

In her early thirties, Holscher began her artistic journey by taking classes in Raleigh, N.C. at the Sertoma Culture Center. There, she and other artists formed a group to learn from one another. “We held shows together and carried each other’s work to compete in area competitions,” Holscher said. “Success in the regional and national shows encouraged me to try international competitions.”

Her success continued to pour over internationally. In 2009 she won the American Watercolor Society’s Gold Medal of Honor in their annual international show in New York City as well as being featured in China’s Shenzhen Biennial and National Travel Show in 2013 and 2014.

Over the years Holscher’s style has shifted from strong composition and value to vivid color and textures. “When I started seeing knock-offs of my paintings by other artists, I knew I had to come up with a style that could not be duplicated by others,” she said. “This gave way to my final and most successful series, shorebirds. They gave me familiar recognizable shapes which I could embellish with unusual color and texture.”

“Because I live in Coastal North Carolina, I find related subject matter more appealing to paint. My husband, Fred, and I love to sit on the beach and share our cocktail hour with the various birds that come to call. I became infatuated with their personalities and interactions and thus began my love affair with the shorebird families who inspired my painting series.”

Holscher remains active in the Arts of the Pamlico in Washington N.C., the State Watercolor Society, and several national societies. While she is well established in the art community today, she still remembers the difficulties and rewards of starting. “When first beginning, take as many classes and workshops as you can and get involved in local art organizations. Develop contacts for support and encouragement. Finally, pull away from the extracurricular events and sequester yourself in your studio, and paint. Be self-disciplined, be alone, and dive into yourself and what feels natural for you to express,” she said.

“We are excited to welcome this award winning artist to the Mattie King Davis Art Gallery,” Public Relations Director Hannah Taylor said. “Her work matches her personality, one of a kind and full of life!” For more information about Pat Holscher and or the Mattie King Davis Art Gallery, visit beauforthistoricsite.org, follow the gallery on Facebook @mattiekingdavisgallery, call 252-728-5225, or stop in at the gallery open Monday through Saturday from 10 a.m. until 4 p.m. on the grounds of the Beaufort Historic Site at 130 Turner St, Beaufort N.C. 28516.