Nationally acclaimed watercolorist Dee Knott died in August of 2013. She was a much beloved watercolor artist whose illustrious professional career spanned 35 years. Her husband, Ray, wanted to honor Dee and her love of Beaufort with a show of her work at the Mattie King Davis Art Gallery in Beaufort. An opening reception celebrating the exhibit is scheduled for Saturday, August 2nd from 5 – 7 p.m. at the gallery located on the grounds of the Beaufort Historic Site.

Dee Knott’s watercolor paintings exude beauty. Her use of movement breathes life into her works capturing an intimate experience to those who view them. A native of Michigan, Knott began painting as a teenager, igniting her lifelong passion for art. During an interview conducted in 2004 Knott remarked, “Painting is a purely emotional experience engulfing your whole being. I strive to reduce each subject to its simplest elements, thus revealing strength and beauty.” 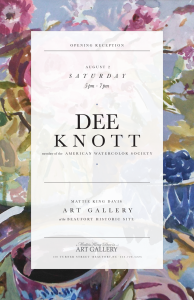 Considered a local, Knott had discovered Beaufort by accident on a trip to the Outer Banks. After that first trip, she knew she had to stay because the seaport village had everything she wanted to paint. After her subsequent move to Beaufort, Knott was diagnosed with Parkinson’s disease, but even this wouldn’t stop her from painting. With the help of her doctors and armed with her artistic drive, she learned new ways to paint the coastal environment that surrounded and inspired her.

Her extraordinary works have been exhibited throughout the world. She was recognized with a myriad of national awards, and her paintings have been widely collected by private collectors, corporate giants such as Walt Disney, General Motors, and Marriot, as well as the governments of China, Japan, and Venezuela. When Lee A. Iacocca, former Chairman of Chrysler Corporation, traveled to the People’s Republic of China and Japan, he carried with him paintings done by Knott.  The paintings were presented as gifts from Iacocca to high-ranking government leaders in China and Japan.  Iacocca also presented a series of Knott’s paintings to government officials of Venezuela.

In addition to being a member of the American Watercolor Society, Knott was also a member of the National Watercolor Society, the American Society of Marine Artists, and affiliated with the Florida Fish and Wildlife Conservation through her donation of work for the decal to protect Florida’s sea turtles. Knott’s painting Swiftly They Rise was selected for inclusion into the 14th National Exhibition of the American Society of Marine Artists in 2008.

“This is a very emotional show for all of us here at the Beaufort Historical Association. Dee Knott did two shows in the gallery, and she was also our friend and neighbor,” explains Patricia Suggs, Executive Director of the Beaufort Historical Association. “She is a nationally acclaimed artist who chose Beaufort for her home, and we are grateful for this opportunity to expose more people to her wonderful artwork.”