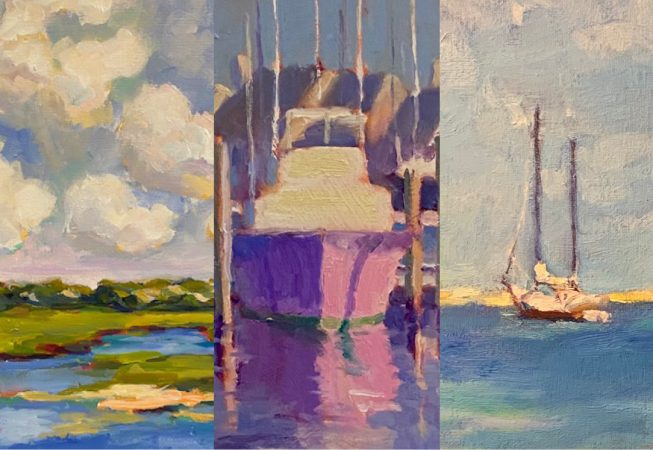 Fen Rascoe picked up the “painting bug” as he calls it when he took art classes in high school and college. However, after graduation Fen boxed up his artistic talents to pursue other life goals. It was not until about 11 years ago that he decided to figuratively and literally unbox his talents when he came across a box full of his art belongings from college. As soon as the brush hit the canvas he caught that bug again.

While he says one of his greatest accomplishments is being recognized by his peers, he feels the ultimate reward of being an artist is establishing relationships with wonderful art collectors.  “Every painting has a piece of the artist’s soul in it and someone connects with that and wants to hang it in their house, which is their home, that’s the ultimate,” Fen said.

Fen loves each of his pieces, but one piece stands out in his mind and has remained part of his personal collection. “It was one of my first ones, when I started again, that I received positive feedback on, I decided to keep that one, because it is the one that made me think I could really go forward with this,” he said. “It was of the Roanoke River lighthouse, which now has been restored and moved to Edenton.”

Much like that lighthouse, Fen’s artistic journey has seen great change. Last year his work was featured on the show, The Obsession of Carter Andrews, which airs on the Outdoor Channel and helped expose his work at the national level.

Like Fen, Lyn Jenkins feels that her greatest accomplishment is the joy her art brings to others. She said she loves creating something that mean something to someone. While she has created many pieces, she has two that have always stood out to her. “One is a small, little painting of two special women on the white sand in the Abacos, in deep conversation, probably discussing their children. The other is a large painting also of two special women leaving Pete’s Pub with blaster cups in hand, definitely not discussing their children!” Lyn said.

Throughout her artistic career, she has met many fellow artists, including her sister-in- law and fellow Fall Party artist, Jaquelin Perry! “Painting alongside my sister-in-law, Jaquelin Perry, is my most favorite painting past time and probably where I have learned the most, while all along just having fun!” she said.

“My mother was a painter, as well as an art teacher,” Jaquelin Perry said. “I grew up going with her to museums, galleries, and on fun painting trips. When I was home with my young children, I started to paint, and haven’t put my brush down since those days, over 25 years ago.”

Jaquelin’s bright colors and beautiful textures bring life to her paintings, which showcase the Crystal Coast way of life. She believes you truly find your style by just continuing to create and encourage anyone inspired to create to, “jump in and go for it.”

Jaquelin will adequately round out the trio of Fall Party Artists this coming October.

“I feel so lucky to live in beautiful Eastern North Carolina where there are scenes to be painted at every turn!”

We hope you can join us in welcoming these three artists at the Fall Party! For more information on the artists, their art, or the Fall Party please call 252-728-5225, visit beauforthistoricsite.org, or stop in and see us at the Old Beaufort Shop at 130 Turner St.