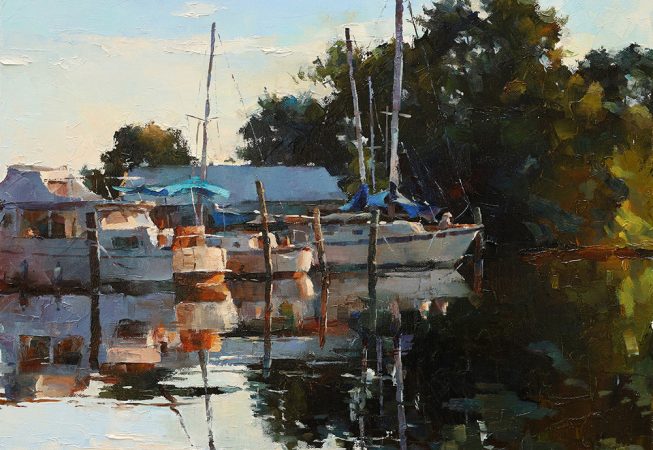 JJ Jiang is a distinguished North Carolina artist who currently resides in Cary. His work, created mainly through watercolors and oils, exemplifies his time living in North Carolina and his hometown Suzhou, China. He has been featured in notable publications such as Our State Magazine, won numerous awards for his work, and juried into four prestigious shows with Oil Painters of America, National Watercolor Society, American Watercolor Society, and American Impressionist Society.

“Drawing and painting have become inseparable parts of my life. They came to me naturally and early,” Jiang said. During the Great Proletarian Cultural Revolution in the People’s Republic of China, Jiang grew up in Suzhou, China. “During that era of madness, drawing, writing, and reading poetry kept me safe and sane and shielded me from the world outside.”

Jiang grew up continuing to hone in on his artistic ability and, in college, studied another form of art, Architectural Design. During his professional career, he worked for prominent architectural groups. He even taught classes at a university, but his passion for painting remained fervently, and he continued to create exquisite pieces.

In 1990, he found a new home in the United States. However, it was not until later that he relocated to Cary, North Carolina. Thanks to Jiang’s impact, Cary has grown further as an artistic community. In 2013, he opened the Village Art Circle Studio & Gallery in the heart of Downtown. The gallery exhibits over 40 artists and features monthly shows, workshops, and more. It is also the working studio of three artists, including Jiang.

Jiang’s pieces capture the viewer and even, at times, transport them. His life experiences in both China and his newfound home in the United States inform and permeate his work. While he takes inspiration from his surroundings, Jiang said he “intentionally never developed or sought a particular so-called style.” Instead, he said, “but I believe if I am true to myself, my art, as a result, will be unique. This uniqueness of one’s work can be called one’s style, and since we’re all different, our work will naturally be unique.”

While he has created many stunning pieces, one series stands out to him. “It is impossible for me to name one piece, but I would say my Girl in a Red Scarf Series was one that was the most emotionally charged and connected to my youth,” he said. To Jiang, the delicacy of the woman coupled with the red scarf illicit vibrant feelings, showcasing his time growing up as a young boy in China during the Cultural Revolution. The Girl in a Red Scarf Series was also the first time Jiang used the medium of oils.

His advice to budding artists? “Keep your sense of wonder and immerse yourself in the process of creating,” he said. “If you find joy in the process, the end result matters little.”