Old Burying Ground: We’ve got an app for that!
Free Smartphone Audio Tour

“After a minute of listening, this is not just a stone. This is a human being. It is unforgettable.”

Increased activity in Beaufort’s historic Old Burying Ground happens every year in the springtime thanks to the glorious outburst of color from the azalea filled grounds.  Visitors and residents enjoy strolling among the live oak trees and old grave markers in the cemetery that was featured in the book, 100 Most Romantic Places in North Carolina, and is on the National Register of Historic Places. The weathered tombstones chronicle the heritage of Beaufort and the surrounding coast with graves of soldiers from the Revolutionary War, the War of 1812, and the Civil War, along with star-crossed lovers, and famous privateers.

This year, our visitors will also be able to hear stories about those who are now buried in these special gravesites as they read the markers revealing the stories of Beaufort’s early inhabitants that included sea captains, soldiers, privateers, ministers, doctors, young mothers and babies. Many of the stories have been passed down from generation to generation. 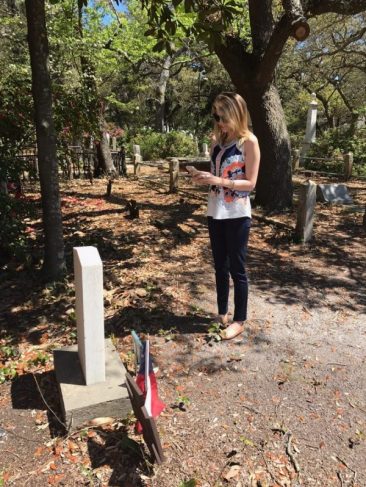 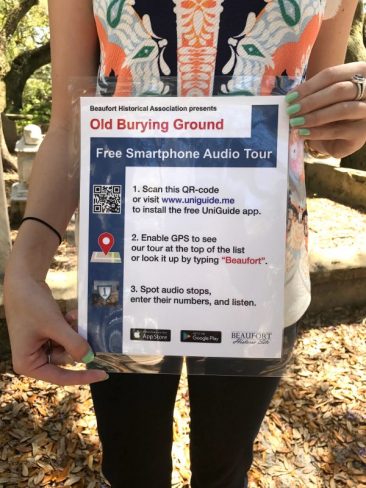 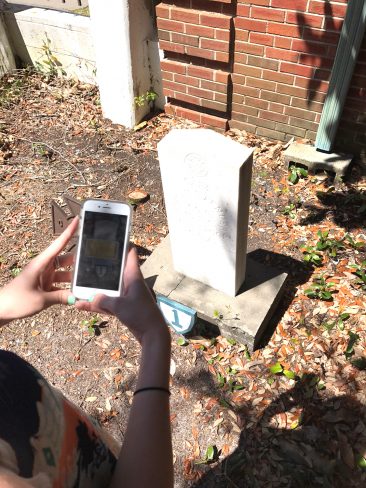 To make the history of the Old Burying Ground come alive, the Beaufort Historical Association has partnered with Uniguide Tours, a travel app offering hundreds of free audio tours all over the United States.  The app can be downloaded on either Google Play or the iTunes App Store.  Photographs of the tombstones are shown while a narrator gives the history. Download here

Vlad Andreev, CEO of UniGuide Tours, visited Beaufort in 2011. “Your town’s historic district has always been on my mind when I was imagining UniGuide and our walking audio tours. I am so excited these old dreams of mine seem to finally be coming true!” explains Mr. Andreev.  He goes on to add:  “We at UniGuide Tours believe that learning makes a truly life-enriching experience. When you learn, even a bit, about the place you are in, it becomes alive to you, it starts breathing and talking to you. It is like you are opening another dimension.  An old cemetery is one of the finest examples of why people need audio tours. Without them, most of us will see a nice stone with barely visible inscriptions on it. After a minute of listening, this is not just a stone. This is a human being. It is unforgettable.”

This new technology is being accompanied by additional upgrades in the cemetery. Stating this spring, new fencing and gates will be installed around the perimeter of the Old Burying Ground. These improvements will be instrumental in the effort to maintain and preserve the rich heritage and powerful stories that live among the tombstones.

The Uniguide Tours are not meant to replace the Association’s live guided tours, rather they are meant to develop interest for further guided tours of the Old Burying Ground with the Beaufort Historical Association’s many knowledgeable guides.   Tours depart from the Welcome Center at 130 Turner Street. The Old Burying Ground is located on Ann Street within easy walking distance from the Historic Site. Tickets are $10 for adults and $5 for children under 12. For more information about tours of the Old Burying Ground or other activities offered by the Beaufort Historical Association, stop by the Welcome Center, call 252-728-5225, or visit www.beauforthistoricsite.org.